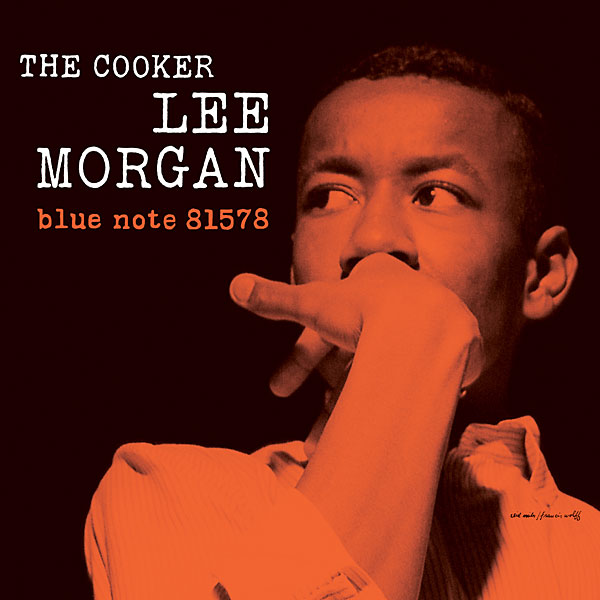 Revinylization #7: The Cooker by Lee Morgan

The jazz collection has an archaeological aspect; it’s one of my favorite aspects of the hobby. More than most other genres, jazz evolved in its early decades, and it did so on record. Each musician was distinctive, changing from session to session, and interacting with other musicians in ways specific to the set, time, place, and mood. Every record, live or in the studio, is a snapshot of where jazz was at precisely that time. You can get to know the styles of the musicians, and with practice you can really hear what’s going on.

I called it “archaeological”, but most archeology is dry, dusty stuff, at least compared to jazz. Archaeologists dig for hours, painstakingly, looking for a fragment of bone or a small piece of pot. With jazz, you buy a record, you put it on the table and you access the vital force of a moment in musical history.

In the 1940s, the mainstream of jazz (as we understand it today) moved away from the blues and towards harmonic experimentation and abstraction. A second branch, exemplified by alto player Louis Jordan (Bird’s yin yang), went the other way, embracing blues and straight beats and paving the way to rock ‘n’ roll. But there has always been cross-fertilization, and in the 1950s, mainstream bebop-influenced jazz began to seek a more down-to-earth sound and return to the blues.

In 1957, just two weeks from a session with John Coltrane which produced blue train (arguably Trane’s first major album), Lee Morgan took Paul Chambers and Philly Joe Jones – two-thirds of Trane’s (and Miles’) rhythm section – to Rudy Van Gelder’s studio. Morgan was, at 19, already a veteran with an expanding discography. It was his 18th session of the year and his sixth session as a leader (including one as co-leader, with Wynton Kelly). Either Chambers or Jones had played on all five Morgan-led albums, but never before had the two played at the same time.

In 1950s jazz, geography still mattered and Philadelphia had a moment. Morgan was from Philadelphia, having followed his idol, Clifford Brown, out of town just before Brown died, aged 23, the previous year. Philly Joe, of course, was also from Philadelphia.

Philadelphia was known for a relatively funky sound. Filling the seat of New Yorker Kenny Drew from the blue train group, Bobby Timmons, a protege of Horace Silver, brought some of that with him. (The following year, Timmons would write the “Moanin'” standard, and Morgan and Timmons would join Art Blakey’s all-Pennsylvania Jazz Messengers. Blakey was from Pittsburgh.)

The Cook begins with Dizzy Gillespie’s “A Night in Tunisia”, which Morgan and Timmons had recorded earlier that same year with the Jazz Messengers. “Tunisia” begins here, as there, with drums and a strong rhythmic push before Morgan plays the melody and Pepper Adams takes a short solo. A long Morgan solo follows, combining virtuoso bebopish riffs with subtle rhythm and blues embellishments. Pepper responds, alternating on and off beats while swinging propulsively. Here we go. Throughout this album, including here, Timmons swings the loudest.

On “Lover Man”, Morgan demonstrates that a player known for slash-and-burn – Morgan is the Cook after all, even if Timmons steals the show, can be introspective. Beautiful things.

The Cook, then, it’s late 50s, tinged with Philadelphia, hard-bop with an outgoing trumpeter and powered by a Coltrane/Davis rhythm section. The influence of Philadelphia ensures its swing. It’s, as they say back home, easy to listen to.

Like other Blue Notes from the late 1950s, The Cook was first released in mono. The stereo version was not released until 1968. (In his studio, Van Gelder had just begun recording in stereo during a May session that same year, with Horace Silver.) Both recordings, mono and stereo, are very well done. The piano is not muffled as often, if at all.

Mono originals from The Cook in good condition sell in the high hundreds of dollars, up to the thousands. The previous US vinyl reissue – in 2006 from Classic Records – was of the mono version; a few factory-sealed copies are still around, selling for over $100. Early stereo copies are hard to find and expensive. With patience, you can find a 70s reissue in the $50 range.

For vinyl fans who don’t want to enter the collector market, this new Tone Poet stereo is the only real choice. Fortunately, it is superb. Like all records in this series, it was overseen by Tone Poet Joe Harley, remastered by Kevin Gray from the original analog tapes and pressed onto 180g virgin vinyl at RTI. Unlike too many high-end jazz-vinyl reissues, this is a true 33rpm LP, with all the songs on one disc, just like the original (stereo) number. The gatefold cover is meticulously crafted. The vinyl is quiet, with no significant flaws. The stereo images are bodily and the soundstage has real depth. To my ear, it sounds slightly better than the 24/192 FLAC file on Qobuz – I don’t know how or why – with a bit wider stage and denser sound images.

The only reason not to buy this record is if you don’t have a record player or are broke.

2020-06-23
Previous Post: Lennie Niehaus, jazz musician and composer of Clint Eastwood films, dies at 90
Next Post: She speaks for me! – Popular world