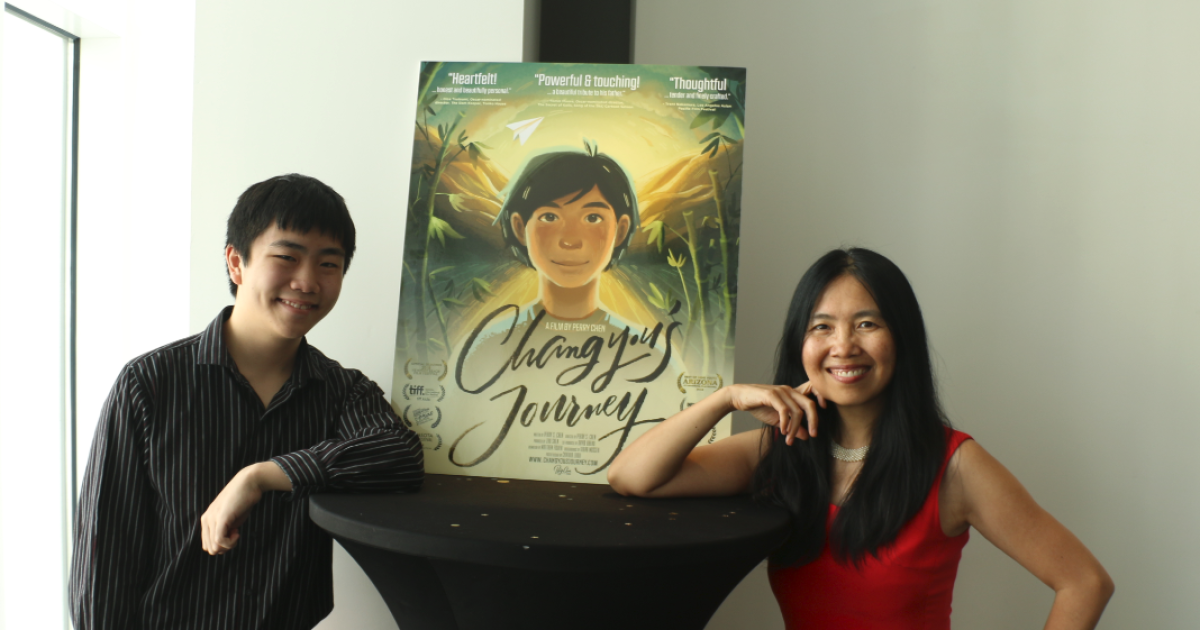 Like many mothers do with their children, she adored her son, Perry Chen, and encouraged his creativity, including writing, drawing, crafts, and animation.

Then came the moment when she realized her attention was being pushed away. She needed to reevaluate her outlook and her relationship with her son, now 22 at UC Irvine.

Shen, with the collaboration of Perry, documents the evolution of their life together in their film “Journey of a Thousand Miles”.

The mother and son will offer a preview of the film, a work in progress, as well as Perry’s film co-produced with his mother – “Changyou’s Journey” – on May 3 during a celebration of Mother’s Day and Heritage Month Asian.

The event will be hosted by Shen’s Bamboo Shoots Productions in partnership with La Jolla Riford Library, Warwick Bookstore and Coffee Ambassador from 6-8 p.m. at the Library, 7555 Draper Ave., La Jolla. Information and registration are available via https://www.journeyof1000milesfilm.com/

A Q&A, moderated by Lei Guang of UC San Diego’s School of Global Politics and Strategy, will follow the screenings.

“It’s a deeply human story, an immigrant story, and above all, a story about (a) family and parental connection to a gifted, free-spirited child,” Guang said in a press release.

Shen describes the film as “a personal documentary directed by a mother inspired by love for her son and co-producer”.

The film, she said, should appeal to a wide audience and those who have endured grief, especially given the catastrophic effect of the coronavirus pandemic.

Her own deeply personal grief stemmed from the death of her husband of 24 years. He was a cancer researcher whose life was taken away by the disease he was studying.

“I felt this anger deep inside me,” she said. “I just felt like it was so unfair – why did this happen to us. A lot of people are now asking the same question.

“So what I’ve learned is that the best way for us, or me at least (and) our family, to go through loss and grief and recovery is to tell our story, because then we do not wallow in sorrow and despair.

“Making this film keeps us busy and engaged so that we can think of my husband and Perry’s father – think of the memories we have and the legacy he left. He touched so many lives. He was a excellent mentor for his students.

“Making this film gives us this creative outlet to tell the story of someone we love. So those memories will take the form of a film that will touch many lives.

“I personally felt that working on this film was my saving grace. I can focus my energy on this inspiring and positive endeavor and work with my son, even though we’ve been through hell. It’s gone from that arm of we’re best friends now, we’re creative partners, we’re each other’s cheerleaders and each other’s biggest fans.

‘Journey of a Thousand Miles’ explores how Shen went from a self-proclaimed ‘Tiger Mom’ to a ‘Zen Mom’ as she worked with her son on the development of Perry’s animated film dedicated to her father -” Changyou’s Journey”.

The boy was 12 and witnessed his father’s decline in his battle with cancer. Perry began working on an animated version of his father’s life. He had already created an acclaimed animated film when he was 11 years old.

“(Perry) said, ‘Okay mum, I’m going to animate this story because I want to keep dad alive as long as possible. I’ll be drawing every day, so the first thing he’ll see in the morning would be my drawings. of this animation. I just hope that my story, my animation, will give him hope,” Shen said.

“I was so touched by his words, his deep love for my husband. … I thought to myself, ‘How could I not bear this?’ »

Perry shared a one-minute trailer with Changyou five days before his death.

“He was very proud of Perry,” Shen said of her husband. “When he was growing up, Changyou wasn’t too mad that he became an artist. …He preferred Perry to pursue a STEM career like he and I did, and to be an engineer, a scientist, or even a lawyer or a doctor. … When he saw how good Perry was in the arts in the last years of his life, he felt, yes, he could support that too.

To honor his father, the son decided, with the support and involvement of his mother, to make a film telling the story of his late father’s life. The film was ultimately completed in six years and generated more recognition for the youngster at film festivals.

It was not easy.

Shen, who was born in Shanghai and raised in Beijing, was driven to guide Perry on the path to success from an early age.

Shen is the daughter of highly educated and accomplished parents. They also clashed with political leaders during the Chinese Cultural Revolution and were sentenced to a labor camp for several years, where Shen spent some of his early years.

After her husband arrived in the United States, Shen followed suit, successfully convincing professors at the Madison campus of the University of Wisconsin to accept her and award her a scholarship. She accomplished the feat with a bold move – making a collect call from Beijing to the chair of the admissions board.

She also obtained a doctorate in biochemistry and an MBA. Eventually, the couple settled in Carmel Valley with her husband, a senior scientist working at a research company developing therapeutic antibodies against cancer.

Like many immigrant mothers, Shen was determined to ensure the future success of her son, who later attended Canyon Crest Academy.

She mentored her son in writing movie reviews for The San Diego Union-Tribune while he was in fifth and sixth grade and in restaurant reviews.

At 9, he was interviewed on CBS Evening News with Katie Couric. At age 10, Shen helped him join the San Diego Press Club and the Asian American Journalist Association.

As Perry grew older, Shen said, he became resistant to her pressure and repeatedly threatened to quit the film that became “Changyou’s Journey.”

When Shen procured the best-selling book, “The Battle Hymn of the Tiger Mother,” written by Yale Law School professor Amy Chua, she was repelled by the narrator’s behavior.

“I read the book, so I was like, ‘She’s a terrible mother, like she was forcing her kids to do things they didn’t want to do, and there were no days off. games. – very, very strict – and it was all about her, like what she wanted her kids to be. I thought I was not a tiger mom. I support my son in the things he loves and appreciates and is really good at, and I nurture his natural talent.

“It took me years to realize that I myself was a mother tiger at that time. I was just unaware of how I was a mother tiger. … I was still dictating to her what he did and his schedule, his activities. He had no say in it. So he didn’t have free will. I realized later that he was starting to resent me …I neglected my son’s emotional needs.

Ultimately, with the help of personal development coach Walker Clark, mother and son overcame their differences and began to accept each other for who they are rather than what they want. the other either, Shen said.

“Our children should not serve as instruments of our achievements and vehicles of our own dreams (and) unrealized goals,” she said. “They need to have their own agency and the freedom to choose how they want to live their life. They came from us, but have their own identity outside of us.

Perry pursued a different academic trajectory than her mother envisioned due to her artistic bent. He is majoring in International Studies with a minor in Chinese Language.

Yet the journey shared by mother and son in making a full-fledged documentary inspired by their late father is far from over.

While the upcoming presentation at the La Jolla Library will be a milestone, Shen says the completion of “Journey of a Thousand Miles” is likely another year off, depending on funding and other circumstances.

She is compelled to complete the project at least in part because of her belief in the value of stories. This was instilled in him from an early age when his learned father read ancient Chinese poems and tales to him.

“Storytelling has such power to connect with other human beings of our humanity and our shared struggles,” Shen said. “When we tell stories of our lost loved ones, they achieve immortality through our stories and the lives they touch beyond their own lives.”