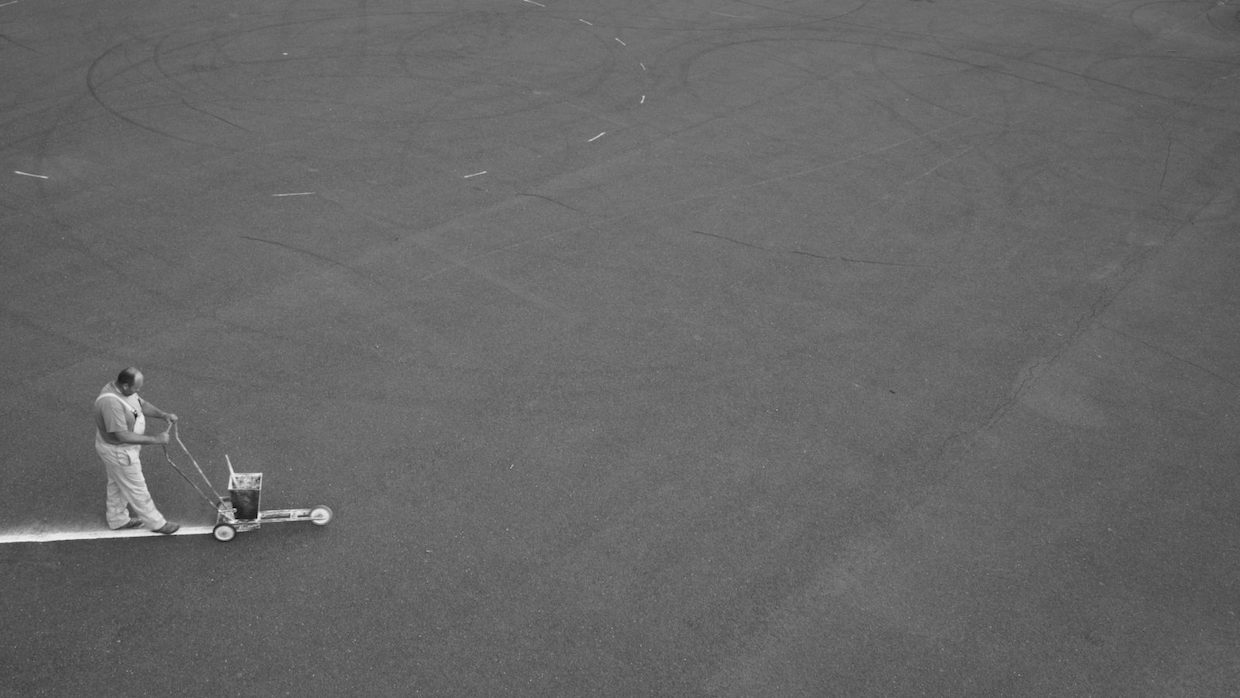 Aftershocks are somewhat the theme of the Jihlava International Documentary Film Festival. There are those you expect, waving at you past screening rooms, pop-up food stalls, restaurants and rickety information counters in the cramped festival center – all reminders that this quaint Czech town of 50,000 inhabitants was not built to host an internationally renowned film festival. Then there are less obvious lines, like the swirling white chalk marks on the sidewalk that connect the various festival locations – an act of “environmental installation”, created each year since 2005 by local artist Vit Kraus in the aid of a sports line maker, which is meant to guide, and perhaps also confuse, visitors as they navigate the quaint streets of the historic old town of Jihlava.

And then there is Lines the film, which deservedly emerged as Jihlava’s big winner when the festival’s 25th edition wrapped up on October 31, scooping awards for Best World Documentary, Best Debut and Best Sound Design in the Opus Bonum section, the main competition of the IDFF. Directed by Slovak debutante Barbara Sliepková, the heavily stylized observational documentary shines the spotlight on a small group of individuals living in the ever-expanding Slovak capital of Bratislava who experience varying shades of loneliness. There’s a woman in her 50s who is both proudly “unsociable” and longs for the human connection that a romantic relationship offers a person. There is a slightly buttoned-up idealist running for district council on a platform of socially and environmentally responsible urban development; a middle-aged bachelor who has become nostalgic for the free avant-market Bratislava of his childhood; a yuppie real estate agent cruising the city alone in his car; a group of builders drawing parking lots and road markings with a device a bit more high-tech than the one Vit Kraus uses year after year.

While in terms of content, Lines has all the trappings of a run-of-the-mill festival documentary – from the fake fly-on-the-wall narration to the vaguely desperate protagonists – it’s Sliepková’s assured sense of visual style and sly encouragement of its title’s metaphorical potential that ultimately makes it a major entry into the contemporary cinematic canon of urban explorations. Artful black and white compositions highlight the titular lines – contrails, towers, blinds, urn slots – as do intermittent scenes of road marking creation in progress. Together with the subjective testimonies of the protagonists, this yields a strikingly evocative portrait of a modern European city and the lines that serve to guide, connect and divide its inhabitants.

Elsewhere in Opus Bonum, railway lines were on the mind of Mexican filmmaker Tin Dirdamal, whose impressionist travelogue dark light journey left with the prize for the best editing of the festival. Part of the “Hanoi Dogma” he helped create – a manifesto seeking to uphold the ephemeral of cinematic expression by, among other things, removing his participating films from all broadcast two years after their respective premieres – the latest in Dirdamal’s date sees him travel 1,700 kilometers by train south through Vietnam in order to deal with the revelation that a local friend has been committed to a mental institution following a violent explosion. Traveling with his young daughter Eva Cardena, with whom he shares a directing credit, Dirdamal, via voice-over, indulges in a rather tedious auteur navel-gazing, where rather banal reflections on parenthood and childhood curiosity mingle with memories fragmented from his institutionalized friend. . If it hadn’t been for the intriguing editing and camerawork – whose colorful mix of gritty home movie footage and lo-fi verity-style train footage wouldn’t have looked out of place in the crowded experimental sections of the festival – the possible removal of dark light journey of the public record would not be a tragedy of the first order.

This is certainly not the case for Tell mewith who Lines, is probably the best novelty to play at this year’s Jihlava IDFF, and certainly the one with the best chance of capturing global attention. The film – helmed and overseen by Estonian director Marta Pulk, but boasting no less than 20 co-directors – is something of an inverted sidekick to the Emmy-winning film. 76 days, Hao Wu, Weixi Chen and an anonymous co-editor’s 2020 dispatch from inside a hospital in Wuhan during the early days of the COVID-19 pandemic. Around the start of said pandemic, Pulk and his co-conspirators, most of them fellow alumni of a Werner Herzog masterclass, posted the phone numbers of helplines that invited people to anonymously share their thoughts. and their concerns caused by the advent of the new coronavirus and subsequent lockdowns. Garnishing these voicemail confessionals with footage shot by the 21 directors in their respective home countries – some opting for staple documentaries like CCTV footage and ghost rides, others, like German director Sonja Ortiz, inspired by performance art –Tell me creates a compelling, transnational record of the COVID era, where conspiratorial ramblings collide with visions of divine punishment, people worry about the health of their family members, and privileged confessions timidly that something is wrong to say about the imposed comfort of a pandemic-induced lockdown. If there is an overarching point, Pulk et al. try to draw from their overall polyphony, it seems to be contained in a succinct vocal phrase: “Don’t think it won’t be easy to forget all this, very soon” – hence the need for a chronicle like Tell me.

That such a current, ambitious and accomplished entry was entirely ignored by the Jihlava jury is hardly surprising, though it might suggest that, nearly two years into the pandemic, we may be seeing a some fatigue regarding COVID as a documentary subject. Indeed, none of the other main section winners have an explicit COVID bend. Winner of Best Central and Eastern European Documentary and Best Cinematography You are Ceauşescu to me is a dramatically uneven but thematically powerful attempt by director Sebastian Mihăilescu to use Brechtian performance to reflect on the legacy, or lack thereof, of former Romanian dictator Nicolae Ceaușescu among the generation of Romanians who came of age long after the fall of communism. Although a bit bland stylistically, Laura Viezoli When you are near me, recipient of a special mention, is a winning and widely accessible charmer chronicling the daily routine in a Tuscan home for the deafblind. Meanwhile, Don’t want to hide saw director Rikun Zhu receive a Jury Commendation praising his “original approach” to storytelling, particularly his use of long takes and scenes featuring lengthy dialogue and introspective monologues, albeit at a running time of 94 minutes, this approach is slightly overstaying its welcome. Zhu still manages to paint a vivid picture of a young Chinese couple, their open relationship and how it clashes with their individual dreams of success overseas and the traditional attitudes that they, despite all their bravado against -cultural, seem to have internalized.

Apart from the main section, Jihlava’s multi-pronged experimental side has mainly caught the eye this year. The international and national component of the Fascinations competition, focused on experimentation, has delivered memorable forays into cinematic abstraction, such as that of Testuya Maruyama antfilm, whose oppressive buzzing soundscape and slowed-down strobe flashes of ant silhouettes manage to simulate life in an anthill. In Arnheim to Anaheimanother landmark entry in the international section, Hungarian director Péter Lichter remixes webcam footage from Disneyland with screenshots of his own editing process, chopped up passages from Disney’s Alice in Wonderland and Rudolf Arnheim’s seminal Cinema as an art, raising the troubling question of whether classic theories of film and reality still hold in the face of the fundamental unreality of the digital age. This concern also surfaced on the Czech side of Fascinations, where Lea Petříková’s short black-and-white film, full of anecdotes and messy, History of the Wrapped Screen struggled with cinema’s propensity to capture only surfaces instead of essences.

The most rewarding experimental piece of Jihlava 2021, however, was found in the retrospective devoted to the Romanian avant-garde of the communist era. Extracted from the Romanian film archives and celebrating a late international premiere, the 1967 film by Mircea Săucan The Alert! is, in the words of section curator Andrea Slováková, perhaps the only Romanian contribution to the new waves of the 1960s. Functionally, a series of four 15-minute educational films on chemical plant safety, with captions on the appropriate resuscitation protocol screen, The Alert! doubles as an abstract love story between two factory workers trying to escape the dehumanizing machinery that surrounds them. Told in circular camera movements and a low angle shot of metal tubes and industrial smokestacks, with all other scenes reminiscent of Mikhail Kalatozov and early Andrei Tarkovsky, Săucan’s film is both politically subversive and gleefully ironic. As the feet of Jihlava participants gradually reduce the lines of the sidewalk of Vit Kraus to hazy spots, The Alert! blithely blurs the lines between commissioned documentary, high drama and absurd comedy, collectivism and capitalist exploitation, passionate romance and the emotional detachment necessary to conscientiously practice CPR. Jihlava, connoisseur of the line, couldn’t have found a more fitting piece of resistance to cap off its 25th anniversary.