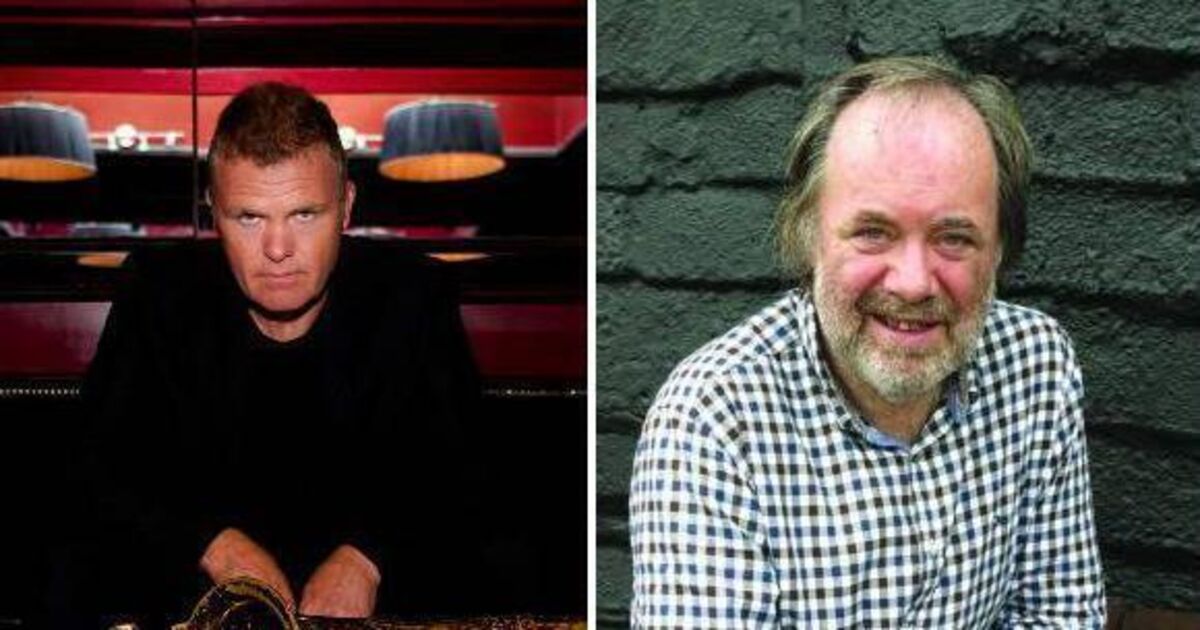 English saxophonist Iain Ballamy first met the late Irish poet Matthew Sweeney in the late 1990s while filming a jazz TV series shot in Southampton. The couple had a passionate and mutual love of jazz, but the connection between them seemed more powerful, immediate and unspoken.

“I think by the way I played and the way he wrote, we just knew we loved each other,” Ballamy said. “We could understand. We clicked.

The saxophonist remembers Sweeney reading two poems: one about a man swimming in the Channel – on the back of a horse (“Crossing”); another about an all-night game of cards between four men and their Uncle Charlie, who was “lying in his coffin,” dead (“Poker”).

“I was struck by the way Matthew’s mind worked, by his extraordinary flights of fancy and imagination,” says Ballamy. “He thought like a jazz musician: the poems flowed freely, a stream of consciousness – they made all sorts of unpredictable connections. There was also something dark, humorous and bitingly honest about his writing, and I liked that too.

After filming, the men left with a bottle of red wine from the studio’s Green Room and hopped on a train to London. “We talked, drank and laughed the whole time,” Ballamy continues. “By the time we arrived in Waterloo, Matthew already felt like an old friend.”

Over the next 20 years, the bond between the duo deepened and grew, aided perhaps by their similar worldview. Both, for example, had a decidedly European sensibility that extended beyond the boundaries of birth and home.

Sweeney was born in Lifford, Co Donegal, moved to London in 1973 and lived in Berlin, Paris and Timisoara in Romania; he moved to Cork in 2008. His common thread was Kafka, his work remains highly regarded in Germany and he is the second most translated modern Irish poet, after Seamus Heaney. “I don’t think Matthew was a Vote Leave person,” Ballamy jokes.

Ballamy, 58, is perhaps known as ‘the fantastic Englishman’ who was a founding member of iconoclastic 80s British collective Loose Tubes and a key member of prog drumming legend Bill Bruford’s band Earthworks -English rock, but it has also forged a distinctly continental identity.

The musician and writer were also adventurous spirits, mavericks always eager to challenge themselves and expand their work and practice. In addition to his 16 award-winning collections of vibrant, mischievous and darkly fabulous poetry, Sweeney has written poetry and children’s novels and co-wrote a satirical crime thriller with English poet John Hartley Williams.

The scope of Ballamy’s work is dizzying: from collaborating with famed English folk singer June Tabor to writing film soundtracks and appearing as a soloist with the BBC Philharmonic. Ballamy and Sweeney were also dedicated and generous teachers and mentors. “I think we were both fascinated by the many different facets of the disco ball, of the whole thing,” says Ballamy.

The duo have worked together on a number of intriguing ventures, from a joint commission in 2001 to mark the opening of the Jerwood Library at the Trinity Laban Conservatory in London, to gigs at a Berlin jazz club and a ambitious inter-arts project entitled An Ape’s Progress as part of the Manchester Jazz and Literature Festivals 2015.

The world premiere which brings Ballamy to Cork this month is posthumous, however. A concert co-commissioned by the Triskel Arts Center and the Cork World Book Fest, and supported

The English saxophonist comes to Triskel to play a piece inspired by the work of his friend, the Corkois poet who died in 2018

by the Arts Council of Ireland, The Owl is Ballamy’s response to a poem of the same name that Sweeney wrote during 12 haunted and helpless nights in October 2017 while awaiting a diagnosis from a neurologist. The news was not good. Sweeney was to die of motor neurone disease ten months later, aged 65.

“Matthew sent me ‘The Owl’ shortly after I wrote it and I promised him that no matter what, I would make it a set,” Ballamy says. “And then, after his death, I wrote the music as a way to both cauterize the loss and pay homage to him. I view it as a response piece – to Matthew, our friendship, his poetry and his plight difficult. It’s also all about the ideas of mortality, darkness, hope, music and truth. I tried to be honest about it all.

Ballamy’s music for “The Owl” is structured in the same way as the poem: the composition alternates between “silent ambient improvisations” which accompany the 12 stanzas – recited by the famous theater and film actor Denis Conway – and written tunes that echo the different themes. and moods, ending with “a kind of Irish tune” titled “Donegal Son”. The exceptional quartet that Ballamy has assembled includes the leader on saxophones, Huw Warren on piano, Matthew Sharp on cello and Roy Dodds on percussion.

“In my imagination, Matthew looks like Jiminy Cricket – he’s there with me, like a partner or a presence,” Ballamy says with a smile. “I can imagine so strongly how he would react to the concert. I know he would like that, that he would have been delighted.

2022-04-04
Previous Post: Grammys 2022: Jazz musician Jon Batiste ends the evening with 5 awards, including album of the year
Next Post: Jazz musician Bill Heid will perform at Joey’s in Export