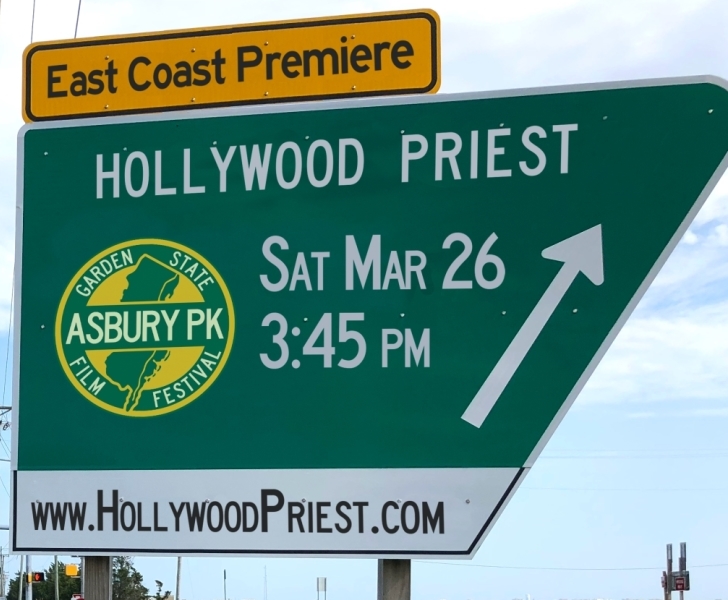 Documentary Film: ‘Hollywood Priest: The Story of Father ‘Bud’ Kieser’ will premiere on the East Coast March 26 at the Garden State Film Festival

“Hollywood Priest: The Story of Father “Bud” Kieser“, a truly unique documentary film that details the extraordinary life, career in the entertainment industry and national influence of Father Edward “Bud” Kieser, a Catholic clergyman and the founder of Paulista Productions, will make its East Coast debut as a presentation at the upcoming Garden State Film Festival March 26and at 3:45 p.m. in Asbury Park, NJ, at the Berkeley Hotel in the Kingsley Ballroom. For more information on tickets, please CLICK HERE

(NOTE TO NEW JERSEY LOCAL MEDIA: Members of the media are invited to attend the after-party for this screening, which begins at 6 p.m. at the Seahorse Restaurant inside the Palais des Congrès. The feast will also mark the occasion of the exact 50and birthday of the film’s producer, Father Tom Gibbons, originally from Morristown, New Jersey.)

“Hollywood Priest” features an in-depth profile of father “Bud” Kieser, a longtime resident of Los Angeles, Calif., who died in 2000 at the age of 71. Father Kieser was a 44-year-old priest, whose legacy continues to this day, with the annual presentation of the prestigious award Humanitas Prize – an honor he founded in 1974. Awarded annually, the Humanitas Prize honors film and television writers whose work inspires greater compassion, peace, love and dignity within the human family.

“Hollywood Priest: The Story of Father ‘Bud’ Kieser” features the extraordinary spiritual and professional arc of a Los Angeles-based Roman Catholic priest who founded Paulist Productions and worked with top Hollywood actors as he was producing the nationally broadcast television series. “Insight” from 1960 to 1985. For “Insight”, Kieser enlisted the talents of many of Hollywood’s biggest stars, including:

Many Hollywood notables are interviewed in “Hollywood Priest”. Among them:

At 6′ 7″ and often referred to as “A Gentle Giant”, Kieser also served as the executive producer of the critically acclaimed feature “Romerostarring the legendary Raul Julia in the title role of Archbishop Oscar Romero, who was assassinated in San Salvador in 1980.

During his long career, father “Bud” rose to fame in Hollywood and the United States as a creator of television content that reflected his deeply rooted personal faith in social activism, non-violence and the resilience of the human mind. Over its decades as a television production, Father “Bud” has received six Emmy Awards; a Christopher Award; the Imogen Award from the National Conference of Christians and Jews; the Gabriel Prize; and the CIMA (Catholics in Media Associates) Board of Directors Award.

“Hollywood Priest: The Story of ‘Bud’ Keizer” was produced by Father Tom Gibbons, vice president of Los Angeles-based Paulist Productions, and executive produced by Maria-Elena Poblacion Pineda. The documentary has a duration of 64 minutes. For more information, please visit www.HollywoodPriest.com.

Father Tom Gibbons was ordained with the Paulist Fathers in 2012 at the Church of Saint Paul the Apostle in New York. Originally from northern New Jersey, Father Tom graduated from Loyola University of Maryland in 1994. After college, he spent time as a Jesuit volunteer in Phoenix, AZ, working with immigrants in El Paso, Texas, and Juarez, Mexico. Upon returning to Baltimore, he began a career as a graphic designer and web developer, working for nonprofits such as Success For All Foundation, Baltimore City Head Start, and Catholic Relief Services.

During his formative years, he wrote a blog titled “Kicking and Screaming” for BustedHalo.com, the Paulista online magazine for spiritual seekers. After serving as a deacon at Holy Trinity Parish in Georgetown, Washington, D.C., Father Tom was sent to St. Peter’s Church in Toronto, where he first served as associate pastor and later as parish administrator . In 2016 he produced a documentary about the founder of the Paulist Fathers, titled “Isaac Hecker and the Journey of Catholic America” ​​- featuring the famous voices of Martin Sheen, Matt McCoy and Bob Gunton.

Father Tom is currently working on a new documentary investigating the complicated legacy of the Catholic Church in California with the film ‘Junipero Serra: Statue of Limitations’, slated for release in 2022. In addition to his work as Vice President of Paulist Productions, Father Tom also does pastoral work at St. Paul the Apostle Catholic Church and Transfiguration Catholic Church in Los Angeles, California.

Maria~Elena Poblacion Pineda
Working on the ‘Hollywood Priest’ documentary, Maria~Elena said, “Father Bud succeeded by ‘thinking outside the box’ to get his projects off the ground. Through this, he reached audiences far beyond the pulpit. .”

Originally from Iowa, Maria~Elena graduated from Pepperdine University with a double major in Audio Visual Communications and Spanish. While still at university, she began her career as a field producer for the international news agency Reuters Television. One of her first assignments with Reuters was covering the World Cup finals, where she had the honor of interviewing soccer legend Pele. This led him to work for numerous productions, including “Day & Date” (CBS), “Access Hollywood” (NBC), “Travel Daily” (Travel Channel/Discovery Communications), “It’s a Miracle” (Pax Communications ), “Snick House” (Nickelodeon) and “Shabby Chic” (Style Channel/E! Entertainment) and as a consultant for the Location and Production Services unit at Universal Studios Hollywood.

After working for several media companies, Maria~Elena started her own production company, Emerging Creation Productions. She made her documentary filmmaking debut with “Through the Lens – The Dream America Tour”, the company’s first feature film which she also produced and wrote. She and her crew traveled across the United States for 23 consecutive days to film the project. The doc had its world premiere at DanceswithFilms and screened at other festivals.

Maria~Elena’s upcoming documentary solves the 50-year-old mystery of an adoption trip to Korea…and the lives that would be changed forever. She will also collaborate with Father Tom on the documentary “Junipero Serra: Statue of Limitations”.

2022-03-22
Previous Post: Screening of the documentary “No Straight Lines: The Rise of Queer Comics”
Next Post: ‘Summer Of Soul’ Wins 2022 Oscars For Best Documentary Film – Deadline