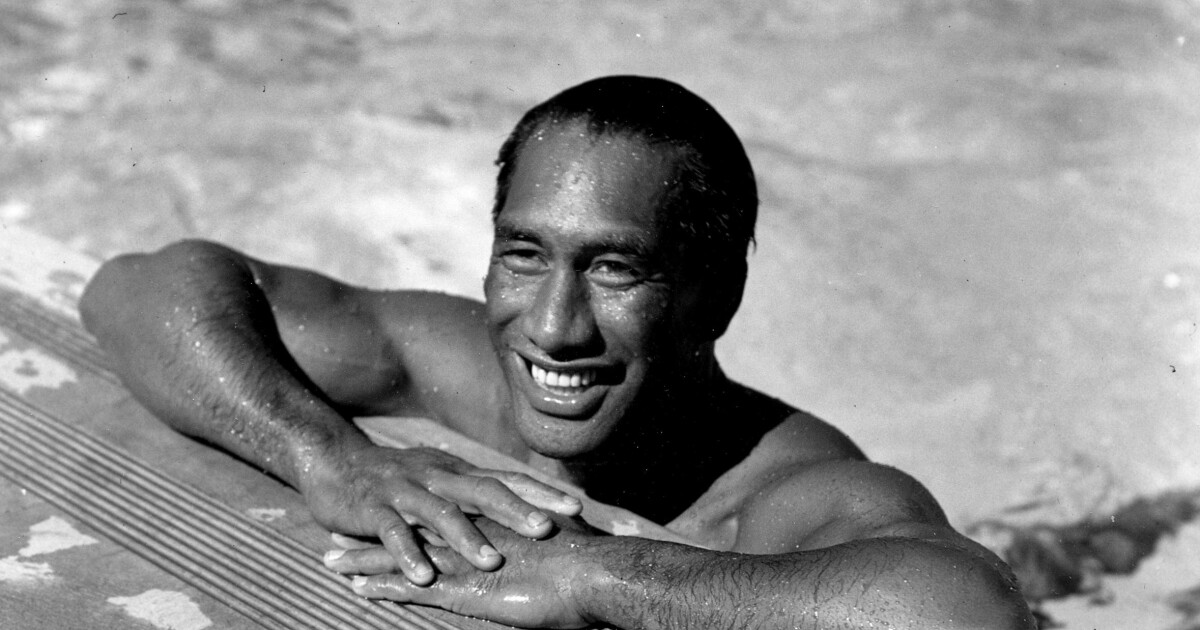 Take a look at the trailer.

The film, directed by Isaac Halisma, explores Kahanamoku’s legacy as a swimmer and as the father of modern surfing. the the first screening takes place on Friday on the great lawn of the Bishop Museum. But the 400 available tickets have already been snapped up.

The Conversation spoke to Brandon Bunag, head of education and public programs at the museum, about a bonus display for ticket holders that honors not one, but two Olympians – Kahanamoku and recent Olympic gold medalist Carissa Moore.

On the “Hawaiian Olympians” exhibition at the Bishop Museum

BRANDON BUNAG: “Waterman” is sold out. We are expecting people on our campus this Friday for the world premiere of this screening. However, alongside this, we are opening our “Hawaiian Olympians” exhibit inside our Hawaiian Hall. What we do is really connect the story of Duke Kahanamoku, one of our first Hawaiian Olympians, to Carissa Moore, our newest Native Hawaiian Olympian who won a gold medal at the first Surfing Games last summer.

BUNAG: We really try to display and communicate and share a kind of story that spans generations – and doesn’t necessarily end. It all really started with Duke and Carissa as just one example of how the story of Native Hawaiian contributions to this global sport continues today. I think sometimes you get lost in the international popularity of surfing. Its early history, as far as we know, began right here in Hawaiʻi. And people like Duke have taken the sport around the world. He brought this attention to Native Hawaiians and their athletic ability with water and water sports at the international level when he was at the Olympics and won in swimming.

He’s an amazing person, definitely an ambassador for Hawaii. I think we’ve heard the term “Aloha Ambassador” used before. He definitely took Hawaiʻi and put us on a map and the contributions he made to water sports in general, you know, in Waikiki, and I think we just want to continue to honor that legacy. Bishop Museum is honored to look after some of his memorabilia, not many, but some of his memorabilia that will be on display in the “Hawaiian Olympians” exhibit.

We plan to have it in place for at least a year, maybe a bit longer – certainly during this next big wave season which is upon us, and maybe partly for the next big wave season and next winter. We want to celebrate the stories of these two people who lived 100 years apart – but that same story of aloha for Hawaiʻi and aloha for the world, aloha for water continues to thrive in the 21st century. I think we really want to honor them and help continue this story and share it with our visitors locally, nationally and internationally.

While tickets are sold out for the Oʻahu screening, screenings on neighboring islands are still available – Click here for more information. This interview aired on The Conversation on November 4, 2021.